A month or so ago Dad took a bad fall.  He’d been trying to get a warmer shirt out of the closet when he lost his balance and fell.  It was just after midnight.  Many people with Parkinson’s have a soft or low voice, including my Dad.  Add to that the clothes absorbing some of the sound, and that mom was in a deep sleep…Dad was on the floor for almost four hours.  (Our room is on the opposite end of the house so we weren’t any help either).

I was telling my friend (who has a family member that works at Hughes Security Solutions) about my idea to prevent that long wait for help from happening again. She also has experience caring for a loved one with Parkinson’s, and was eager to help.  There were several small personal alarms to choose from.  I picked out the one I thought would fit best on his walker leg. It cost just under $18. 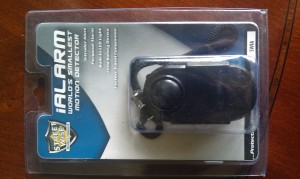 I chose this alarm because it works like a grenade…pull the pin and it goes off.  If Dad’s tremor was extra bad, or he was too weak to hold down the button, all he’d have to do is pull the cord. Also, the pin never comes all the way out, so you’re in no danger of losing it.  A simple tap to push the pin back in turns off the alarm.

Step 1: I moved the wrist cord to the pin.  This would be tough for someone with PD to do themselves, and I admit my efforts aren’t the prettiest, but it worked. I used a pair of needle nose pliers to remove the ring holding the cord, as well as the cute rhinestone charm off the pin. Moving the cord ring to the pin was more challenging than I’d thought, but it’s functional. 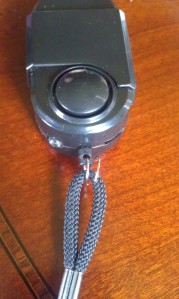 (This particular model also has a motion sensor option.  I made sure that switch was in the “off” position, and closed the sensor cover.)

Step 2: I attached the alarm to the front leg of Dad’s walker using 3M Command Picture Hanging Velcro strips.  (about $4 for a package). I attached it high enough above the wheel that there is no risk of it being accidentally activated, but low enough that if he was on the floor he’d be able to reach and pull the cord. 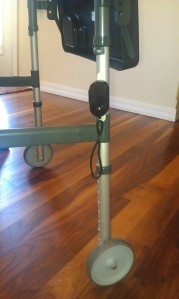 Hopefully we won’t need to use this, but it does give us peace of mind that should this happen again Dad won’t be on the floor for hours.

TIP: Make sure to remove the batteries BEFORE starting your engineering work…otherwise your family will be subjected to 100 decibels of shrieking alarm.  This model has a slide off battery cover, but some have tiny screws that may be difficult to maneuver. 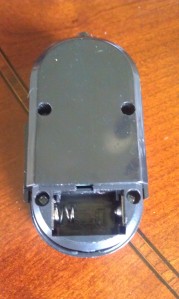 As I continue my own journey of Awareness to Action, I’ve been blessed to meet many kind and wonderful people along the way. Each of us has been touched by this disease, and chosen not to let it defeat us. Each of us has chosen to contribute our individual voices to join a unified chorus demanding a cure. Each of us has our own story, and our own way of making a difference. From those who wake up every morning and smile through the tough times as they deal with the reality of life with PD, to those that make sure they are being the best caregivers they can be.

Advocates in action include Holly, Mary Jo and Bette, caregivers themselves who donate their time to bring the latest in research and information to the members of their local support groups. Together we have launched a grassroots education campaign here in the Treasure Valley to let Doctors, Nurses and Physical Therapists know that there are not only patient resources available, but also ongoing education opportunities for them as providers.

Advocates in action include Victor and Wendy Baron, founders of http://www.ipdsg.org. Motivated by their own experience with misdiagnoses, they have created a non-profit organization dedicated to educating medical providers in Idaho about Parkinson’s Disease, as well as being an on-line clearinghouse for patient information.

Advocates in action includes…you. Your voice. You don’t have to have PD, or have a loved one with PD to make a difference. You know me, so you know at least one person whose life has been changed forever by PD. I ask you to support Parkinson’s Awareness Month by registering as an advocate at http://www.parkinsonsaction.org. It’s as simple as a few minutes a month, responding to an action alert. PAN does all the work for you. They send you the action alert, you put in your zip code, they give you an email template or talking points, you hit send. That’s it. I’m asking you to make the move from awareness to action…to advocacy.